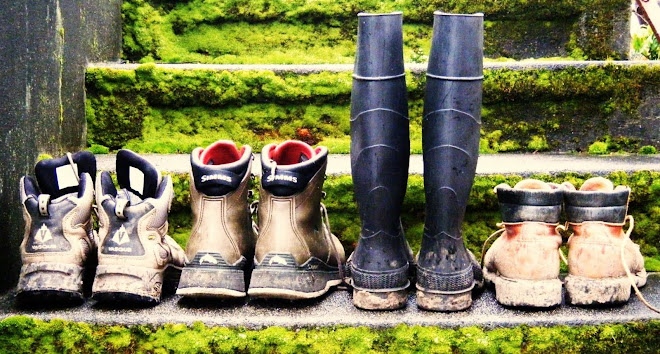 The Gift of Starting Late 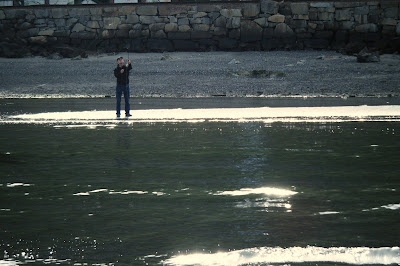 My friend Tom grew up fishing; his cast is lovely and natural even though he hadn't picked up a fly rod for years the morning I took this photo. I got a late start to fly-fishing; until a few years ago I barely knew what it was, and running left no room in my life for another outdoor passion. Hiking, snowshoeing, cycling, and everything else were the side dishes, but running on roads and trails and hills was the way I touched my world and centered myself. There were a few gaps in my running resume, but I always came back, and always pictured myself as one of those sprightly eighty-year olds who can still drop a few youngsters in a local 10K. Then an intractable knee injury cut a hole in that picture. Then I met a man who took me out a river and handed me a fly rod.
Most fly-fishers I know have been doing it for dog’s years, and many of them kindly assured me that starting at forty I would do all right, but never as well as someone who grew up fishing. My cast would never be quite as good as if I’d started with a young body and brain, and years of learning to read water hadn’t piled up behind me. However, starting late means I don’t carry the weight of what I “should” know by now, and life's journey has taught me some useful things. I’ve learned life is boring if I only do things I’m really good at, because that list is a lot shorter than the list of things that might be fun -- so I do the things that bring me joy. I’ve learned that investing time and attention can get you just as far as being gifted. I’ve learned deep in myself how much I truly don’t know, so I don’t mind asking questions, even those that seem a bit dumb.
But the best part of starting late is that all my fly-fishing memories are fresh still, fully colored and fragrant. I remember the first trout I saw, caught from an alpine lake, sparkling in the mountain sun. I remember the first fish I caught, a six-inch rainbow on the Teanaway River on a June day, and how that tug on the other end of the line was connected to a previously unknown place in my heart. I remember the freezing winter afternoon and melancholy sinking sun when I landed my first decent-sized fish. I remember the first time I caught a fish on a fly I tied, a scraggly elk hair caddis, and how I felt like a genius. I remember the giddiness of buying my first nice fly rod, and the beauty of the first fish it brought me, a brown trout from Rock Creek in Montana, with a bright golden back and silver belly and spots like little gems.
I think about all the things I didn’t know a few years ago and that I know now, and then I think about all the things I don’t know yet and may never know. Now I notice all the blue squiggles and spots and spaces on maps, and how they connect and define all the other places on maps. I think about all the fish I have yet to catch, steelhead, sea-run cutthroat, grayling, a list too long to enumerate. I think about everything ahead of me, and I feel grateful. Because even starting late, there’s plenty of time.
Posted by Soggy Boots at 5:31 PM 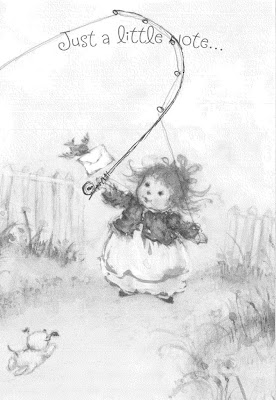 One of my coworkers decided my departmental birthday card was too cutie-pie for me, so he upgraded it with a fly rod. I love how the sweet little bluebird bearing birthday greetings is being totally ignored in favor of the fish on the line. Pretty decent bend in the rod...
Posted by Soggy Boots at 5:01 PM


“Have fun, honey! Don’t get dirty!” I knew plenty of little girls whose moms sent them outside to play with those parting words, and I was luckily not one of them. Once I changed into official play clothes, all bets were off. I could come home covered in oxide-red dirt, pockets full of rocks or anything else I found, and get a warm motherly welcome. Early days, “helping” my dad dig in the garden and climbing the cottonwood tree in the front yard were adventure enough. Then came a bike, and my radius increased. Then I was old enough to walk to school on my own, and the afternoon walk home took longer and longer as I found more detours through arroyos and open spaces. I came home with all kinds of grimy detritus, bugs, wilted wildflowers, and once a hand stuck full of cactus spines.

My mom let me explore on my own terms, appreciated the treasures I brought home, and generally let me have the run of the neighborhood. She taught me the usual things about staying safe, but she never made me fearful. In short, she gave me the freedom that most boys had. I remember one summer when she imposed a moratorium on shorts because my skinned knees kept getting re-skinned – I generally looked everywhere except where I was going. At the time, this seemed incredibly strict. However, a couple of years ago a bramble of blackberries saved me from a swim in the Green River when I was looking more at a bird than where my bike was pointed. In retrospect, I think Mom made the right call about shorts that summer.

My stepmom, who quickly became “Ma,” met my dad when I was sixteen. As a mother of four kids older than me, former Navy nurse, hospital nurse, then school nurse, she had seen pretty much everything. She wasn’t cynical; quite the reverse, but she was unflappable and always knew what to do. Strained back on a camping trip, sprained ankle on a trail run, allergy attack on a bike ride, bumped head, blistered sunburn – Ma was the person who could help. Teenage dramas, school, friends, boyfriends, first years of college – she saw me through all of it. She had taken her kids camping and fishing and was comfortable in the woods, which made me feel comfortable anytime she was there. She carried humor and calm with her in all situations, and helped me develop a sense of perspective. She also taught me something I always suspected as a little girl: wearing a nylon slip under a summer cotton dress is ridiculous. “People already know I have legs," she said, "it's too darn hot to wear a slip!"

I sprained my ankle last spring on the last day of a fishing trip; the night before heading home was spent with my dad and stepmom. I’ve sprained enough things over the years that I know pretty much what to do, but it felt great to have Ma take a look at it and give me some advice and TLC.

I’m fortunate in many ways, not least in feeling that the world around me is a good place, wide and welcoming, and that exploring it often requires one to come home a bit grubby. I’m fortunate to have been raised by these two wonderful women whose words and lessons to me complemented each other so well. And I'm deeply grateful that as the years have passed, we’ve become true friends. Mom and Ma, thanks, and Happy Mother’s Day.
Posted by Soggy Boots at 10:43 PM 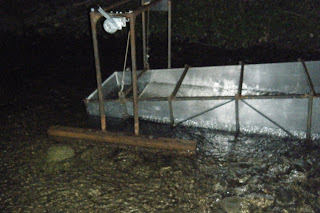 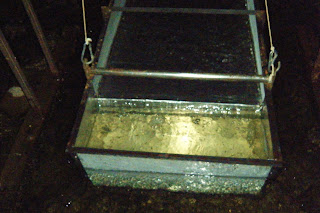 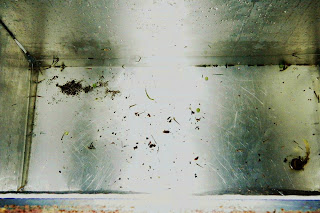 The fish in question were kokanee salmon fry, recently hatched in Lewis Creek and making their way into Lake Sammamish. The Bellevue-Issaquah chapter of Trout Unlimited, along with other groups and agencies, is on a mission to save these native fish in the lake they've inhabited since the last ice age and restore their numbers to a self-sustaining population. Part of the work is counting the fry as they swim down to the lake and the adult fish as they return to spawn. The photos show the counting trap and some fry swimming in the pen before we gently scooped them out to count them and release them back into the stream. Dedicated TU members do this task three nights a week from 8:30 til midnight or later, for several weeks as the fish emerge and swim to the lake. The trap is lowered into the stream, "fished" for about 45 minutes, fry counted and released, then the process repeats until the count starts dropping, as the fish begin their journey downstream after sunset.
I've seen fry swimming in sheltered areas of rivers but never looked really closely; these tiny creatures, not much bigger than the fir needles floating in the pen with them, already look so much like the fish they'll become. Bright golden eyes, huge compared to the rest of the body, silver bellies, green backs with tiny dark speckles. Some, more recently hatched, still have pink yolk sacs attached to their bodies. Some are visibly more vigorous than others. It's amazing to think of something so tiny swimming straight from a shallow rocky little stream into a huge lake and making its life there, and yet carrying within itself the imprint of this particular place all its life and returning here to spawn.
Lewis Creek runs through a suburb of large lakeside homes; it's narrower than most of the dining rooms in these houses. It feels
surreal to be wearing waders and a headlamp, counting tiny little fish, while standing in a thin strip of darkness cut into the land and surrounded by orange-lit streetlamps, glowing windows, and passing headlights. This small hidden piece of wilderness within a thoroughly domesticated landscape is the future of a wild fish striving to live in its native waters. 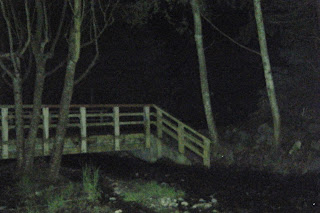